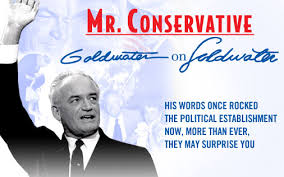 In 1964 the Republican Party’s nominee for President of the United States, the Senator from Arizona, Berry Goldwater during his nomination speech proclaimed to his party as a precaution that, “Extremism in the defense of Liberty is no vice, and moderation in the pursuit of liberty is no virtue.” But on the issue of Civil Rights, the Senator displayed what many African-Americans viewed as a grotesque level of indifference towards the plight of blacks and other minorities in America, by agreeing with the Dixiecrats who opposed Civil-Rights on the grounds that it was a violation of “State Rights,” a view which in retrospect supported the preservation of “Jim Crow” laws.  Most historians view 1964 as the year which marked the genesis of the Black Vote becoming a solid voting block for the Democratic Party, and the Republican Party is on the verge of making a similar mistake with Hispanics, if last night’s results were any indication.

Senator Berry Goldwater went on to lose the 1964 election to President Lyndon B. Johnson by one of the greatest landslides in American political history. Last night, the Republican Party’s chickens came back to roost. The Party’s extreme candidates lost at an alarming rate, particularly in the Senate, and the ripple effects would have been felt in the House of Representatives also if it weren’t for redistricting, a process which is so grossly corrupted by partisanship on both sides, that it is akin to the referee of a NFL game being the owner of one of the teams playing.

As the 2012 Presidential Election results came in, a sense of vindication consumed my emotions, like a portentous writer, puffed up with vanity. For all the pieces I have written here at Ideafart.com forecasting the impending threat to the GOP’s electoral viability due to the Party’s inability to adapt to the country’s changing demographics were being manifested in the exit polling and the eventual election results. The GOP’s days of running up the clock on the White Vote in order to win elections has now come to an inevitable close, perhaps forever.

If Republicans believe that their party lost this Presidential Election because they had a flawed candidate, or because Gov. Romney wasn’t conservative enough, and starts to engage in recriminations, then they will have grossly misjudged the election results, as well as the Party’s path forward. Apart from being the superior candidate, the President won reelection because the Democratic Party has a coalition that’s contemporary and more representative of America’s diversity, and they came out to vote. One the other hand, the Republican Party is still clinging on nostalgically to a static base whose electoral clout has diminished tremendously, a status quo which is a recipe for minority status.

Passing Immigration Reform in order to appease Hispanics may not be enough to mitigate the severe disadvantage that the Republican Party now has in the Electoral College. The Party needs an overhaul on a plethora of issues, not the least of which includes the role of government and social issues in particular, unless they are content with the ominous threat of being relegated to permanent minority status. One of the greatest miscalculations of the Republican Party’s strategy is the failure to realize that people as a result of our nature gravitate towards those who support us, as it was so clearly put by one of the auto-workers in Ohio, “President Obama saved our jobs, now it’s our turn to help him save his.”

But with all the negativity, triumphs, and disappointments of this campaign cycle, perhaps we can all find some solace in how Gov. Romney was magnanimous and gracious in defeat. The Governor after exhibiting some apprehension about the results from Ohio walked out on the stage in front of thousands of his supporters in Massachusetts to give his concession speech. His face symbolic of a man concealing his emotions by exhibiting an admirable degree of masculinity, as the Governor stood in front of the podium in solitude, the deafness of solemnity painted over the crowd like a fog, as if they were not only witnessing the death of  their candidate’s political career but also the inevitable realization that the America which they have known politically for generations may have changed to the disadvantage of the Republican Party electorally.

Governor Romney, through the dignified act of enthralling deference congratulated the President with aberration on a well-run campaign, thanked his supporters, Congressman Ryan, his staff, and his family. Especially, his wife Anne Romney; who he claimed would have made an exceptional First-Lady with the look of disappointment carved into his face as he looked towards her direction. The Governor promised and encouraged his supporters to pray for President Obama. And at the end of perhaps the greatest concession speech I’ve ever witnessed, Gov. Romney’s family came pouring out to greet him. His wife Anne, as she hugged him, her face plastered with sorrow, opted to exit the stage rather brusquely. Perhaps, she didn’t want to linger, for the thought of defeat was too much to bear.

Finally, the result of President Obama’s reelection also discredits one of the greatest perpetrators and purveyors of misinformation and ignorance, masquerading as a news network (Fox News). The grandiosity of their election predictions and Karl Rove’s reluctance to accept defeat in the face of the impossibility of his candidate’s chances leaves an intelligent mind bewildered, as if there was a controlled substance let loose in the Fox News studios which was responsible for their often delusive behavior. But somehow I doubt that Fox News shall relent in their often unreasonable and bias reporting of the President as the second wing of the Republican Party. I must admit, nothing gave me more pleasure than to watch the faces of Fox News anchors when it was announced that President Obama would be reelected. The Fox News anchors, as well as the Republican Partisans who are a constant on the network, began to lose confidence when it became clear that the President was going to carry, New-Hampshire, Michigan, Pennsylvania, and Wisconsin. States that the Romney campaign hoped to win in the unfortunate event that Ohio went the way of the President.