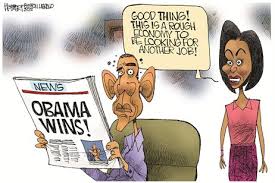 Decades from now, when Political Historians are analyzing their way through the archives of American Political History, they shall conclude with unanimous certitude, that the 2012 Presidential Election results were indeed an insidious apogee of the Republican Party’s descent into political abyss. A defeat brought upon by political malpractice, self-injurious behavior foiled amid a tidal-wave of demographic changes; groups whose apprehension or ambivalence towards Republican Policies were exacerbated by the Party’s hostile tone towards their interests.

Consequentially, in many circles across America the Republican Party’s brand is now more maligned as the Party lays moribund. But this is hardly the first time when the demise of a major political party has been foretold. Folks have long predicted the demise of both political parties with increased regularity, particularly after national elections, depending on the magnitude of the shellacking endured by loser.

During the 1970s, and especially the 1980s, when Democrats lost three Presidential races in a row, many began to write the obituary of the Democratic Party, until the Party altered some of its positions by nominating then Gov. Bill Clinton as its nominee for President of the United States. In the 1960s and 1990s, folks also began to predict the demise of the Republican Party; suffice to say, none of these predictions have come to fruition.

As a result of this generous electoral misfortune, equivalently inflicted on a bipartisan basis, a process born from Americans’ desire for divided government, many conservatives now dismiss any notion of the Republican Party’s demise as a gross exaggeration, and alarmist at best. They argue every Party has its ups and downs. Today we are predicting the demise of the Republican Party, in the next election cycle it may well be the Democrats turn, as it is often the case in American politics.

But is this grave and ominous threat to the GOP’s political viability the same as all the others? The answer is no. This demographic change is unique; though it may not yet be a fatal-blow, nevertheless, the threat has the potential. Thus, the Republican Party has some serious soul-searching to do. The Party is faced with a plethora of choices, few of which are likely to succeed in adapting to the new demographic reality without genuine moderation in policy and tone.

As I feared, recriminations in the GOP ranks have begun; the kind which harkens back to the old adage, “Victory has a thousand fathers, but defeat has none.” There are those who believe that Governor Romney lost because he wasn’t conservative enough, “Tea-Party” members in particular. They argue conservatism wasn’t part of the Governor’s DNA; he contorted to the “Right” to the GOP’s benefit, but also as a matter of convenience.

The formal augment, if it is allowed to prevail, the Republican Party would have grossly misjudged the 2012 election results.  And any attempt henceforth to repair the Party’s image with women, minorities and young people, shall inevitably produce and adverse result which may likely be similar or worst than their 2012 defeat.

But there are others like Steve Schmidt, formal Senior Campaign Strategist and adviser to the McCain Presidential campaign in 2008, who argued that “Conservatism has been a governing philosophy in America for decades, and it has served this Country well.” Part of Republican Party’s problem in 2012 was, they nominated loons, he explained; his face enraged with frustration. Case in point; candidates like Richard Murdock,  individuals who are manifestly unqualified for the offices for which they seek. Folks who have no business running for political office, he continued. The Party must tailor its message in a compassionate manner, and the Party’s rift with Hispanics must be repaired.

My views on this subject have been persistent, as my readers may well be able to attest. But I shall go further than Steve Schmidt. The GOP has to abandon its current infatuation with social issues like abortion and gay-marriage, just to name a few, because it is killing the Party’s brand. Though, these issues have won Republicans elections in the past, the new demographic reality has turned the tables. Thus, allowing the DNC to bury Republican candidates under and avalanche of effective negative ads, if the 2008 & 2012 Elections were any indication, is working.

If the GOP wishes to win another Presidential Election, it must make a genuine effort to reach minorities, not by dressing up conservatism and waging a campaign of conversion, or by nominating Sen. Marco Rubio and Gov. Susanna Martinez as the Party’s Standard bearers in a contrived and reactionary manner without policy changes. That would be an effort in futility; for that train has long left the station, especially for African-Americans. A group whose distrust and contempt for the GOP is historical in nature, rather; the GOP must embrace minorities’ interests even if it’s incompatible with their political ideology.

In order to reach minorities, the GOP must understand and act upon this salient fact of human

nature. Which is, people embrace those who embrace them; and the way to embrace minorities is by embracing their issues. Issue like affirmative action, the “Lilly Ledbetter Act,” comprehensive immigration reform, among others.

The Party must cease deriding government or the entitlement system; for many minorities view the role of government in said matters quite positively. Apart from not trying hard enough, part of the GOP’s struggle to attract minority voters lies within the Party’s obstinate and irking hubris. The habit of recruiting minorities who subscribe to their political ideology, and parading them as if they were a human-axiom; symbolically saying, these are the leaders you ought to emulate.

Instead of giving minorities the leaders they can relate to, the GOP decides who they ought to champion. Almost always, these individuals are folks whose political ideology is incompatible with the community from which they hail; for example: Secretary of State Condoleezza Rice, Attorney General-Alberto Gonzalez, Clarence Thomas etc. The above names are people with impeccable credentials, folks whose achievements most minorities would like their children to emulate. But kids are less likely to aspire to be the next Condoleezza Rice or Clarence Thomas if they are some-what pariahs within their own communities, because most people view their political ideology as detrimental to the community’s interest.

Finally, the political dilemma faced by the Republicans can only be mitigated by them muddying the waters between their policies and the Democrats on social-issues. Clear contrast to the right of Democratic policies shall increasingly become toxic for voters henceforth.  Their economic argument may still hold water in many pockets of this country but socially the Republicans have to seriously reassess their positions on many issues. The GOP must now take heed, for the new demographic reality is a title-wave that is likely to sweep them away like debris unless they can adjust accordingly.

Conservatism is an ideology carved from our rudimentary human intelligence. For most people, education and exposure to diversity is the antidote which triggers an ideological transformation toward liberalism or moderation. And if this analysis is true, then the GOP must develop a brand of conservatism far removed from the now redundant version, to a version more compatible with contemporary times. But shall this new version truly be called conservatism? Such a question is indicative of just how difficult the path ahead is for the GOP.